How to Communicate Better With The Locals

The Philippines is ranked #3 in Asia in the English proficiency scale, just behind Singapore and Malaysia. This makes the Philippines a very attractive destination for English speakers who want to visit Southeast Asia.

But if you think that communication will be smooth and problem free, think again. While you can expect most conversations to be fluent, there are minor subtleties that can lead to misunderstandings. You don’t need to worry about it that much. Nonetheless it’s nice and useful to know some of the local lingo, or in the case of the Philippines, the local interpretations of certain English words.

How did Filipinos become so fluent in English, and what went wrong?

The history of the English language in the Philippines goes a long way back, and it is an interesting one. The Philippines was handed over to the U.S. by Spain back in 1898. Until then Spanish was the lingua franca of the country for around 300 years, but then the English language gradually established its position as the second official language.

English is now used in business, high education, and as a status symbol. It isn’t surprising at all then that the English language in the Philippines took its own individual path, to the point that it was branded as Philippine English by linguists. Therefore, it might be unjust to say that Filipinos misinterpret English, it’s just that they have their own dialect of it.

Some words have a completely different meaning here 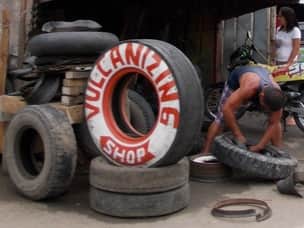 Filipinos took some English words, totally ignored the original meaning, and intuitively gave them new meanings. You probably won’t encounter all, as some are very specific.

Artist – we first heard it while going around with some local friends in one of the posh neighborhoods of Manila. One of these friends told us the good looking woman who just walked past us is an artist. Apparently, artist in the Philippines means a celebrity.

Gimmick – going out with friends is called a gimmick. God knows why, but that’s how it’s called.

Another medical condition is nose bleeding. When you’ll talk to Filipinos, many time they’ll let you know that their nose is bleeding, or have a nosebleed. Hold your horses and don’t offer the speaker some tissue paper, he or she actually means that although they probably understand what you’re saying to them in English, it’s very difficult for them to answer in English.

One of our favorites, that might actually come handy, is the Vulcanizing Shop! It’s such a cool name, that makes you wonder what’s going on inside? It’s actually just a tire repair shop, and the name comes from the chemical process of converting rubber to a more durable material. So remember, if you happen to get a flat tire somewhere on the road, don’t ask for the closest tire repair shop, as you will get a blank stare in response. Instead, ask where is the closest Vulcanizing Shop. 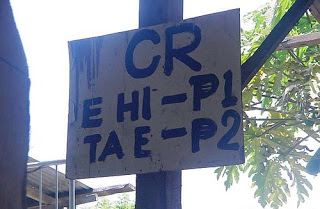 Filipinos love nothing more than abbreviating words, and not only in written forms. For instance, air-conditioning will be aircon. Another easy one will be McDo, and if you guessed right, it is the local name for McDonald’s.

But what will you get from K.J. or C.R.? If someone calls you a K.J. it means you’re a killjoy. C.R. is special because it is both under the acronym, and the “we’ll use English words to our liking” category. It stands for comfort room, which is a bathroom, but if you’ll ask somebody where the public bathroom or toilet is, he most probably will not understand you, and that can put you in a tough situation sometimes.

Another one that really left us baffled was Unli. When we bought a local sim card, we wanted to text freely and have internet all the time. The lady in the shop will tell you that for 999P you’ll get unli text, and unli internet. If you are familiar with Filipino accents, the beginning of the word unlimited “unli”, sounds pretty much like the way Filipinos pronounce the word “only”. Also very helpful when eating in fast-food restaurants, as many of those offer Unli rice for a small additional fee, if you feel extra hungry.

These phrases are the most confusing, as the speakers might use Tagalog phrases translated to English, or just hide cultural subtleties under English words, so you might think they mean one thing when they actually mean something completely different!

For a while – We all know what it’s supposed to mean, but since it’s roughly translated from “sandali lang” – (just a while), and is used in a different way. In the Philippines it means “please wait”, or “hold on”, and you will hear it all the times when waiting for service.

“Did you eat?” or “have you eaten yet?” is a question you might be asked by somebody. it’s not that they think that a foreigner is too lost and incapable of feeding himself? In the Philippines this question is just another way to ask “how are you” and to show someone that you care about him. Keep in mind that this is a culture that strongly revolves around food, so it actually makes a lot of sense.

“It’s ok” is probably the most confusing of all. It might happen to you that you will ask people for recommendations, their opinions about something, or just general questions. A lot of times the answer will be “it’s ok”. What this usually means is that it’s actually NOT OK. Depending on the intonation it can also mean that it’s indeed ok!

It’s ok to be confused, but think of it as an opportunity to peek into the Filipino culture

It is true that unlike countries where locals don’t speak English at all, it’s not a matter of life and death. Not understanding these small subtleties won’t probably do anything. On the other hand, it’s quite fun to find out these differences. Some are just funny, and some really tell you something about the local culture.

Of course the phrases presented on this post are only a drop in the ocean, and even us are constantly learning new ones. And what about you? We’d love it if you shared some of the Philippine – English phrases you learnt on your visit, and add to this conversation.