Our Manila city tour (Old and New) offers a great opportunity for tourists to explore and discover the other side of the capital that most people don’t get to see. For those of you who only have a single day to spend in the city, this is the most recommended tour to take in Manila. It will give you a quick, yet insightful, glimpse into the rich and diverse layers which construct Filipino culture and history.

If you are staying in Manila for a day or two, our city tour can be easily integrated into your daily program of activities. The tour offers 4 hours of exploring interesting spots in the city and can be booked for either morning or afternoon departure. It can also be combined with other tour add-ons such as the Baseco slums tour and a visit to the National Museum.

Inquire Now About This Tour
The old city of Manila is also called Intramuros, and is the focal point of this tour. The other locations we take you to compliment it very well, as they highlight the contrast the city offers between different cultures and eras. But still, Intramuros is the most impressive and unique place to visit in the city.

If you only plan to spend a single night in Manila before heading out to the islands, this is the tour you should take. It will give you the most holistic experience and help you to quickly understand what Manila is all about. The tour will also enhance the rest of your trip, as you will be better equipped with knowledge of local culture, helping you see things in the islands through a different perspective.

Below, you can find information of the basic itinerary and a short description for each of the famous landmarks. Several add-ons, such as Chinatown or the National Museum are also possible with no extra cost if you want to take a longer tour. No matter how you wish to experience Manila, just contact us and our experts will help you plan the best tour possible.

The tour starts at the historical Rizal Park otherwise known as Luneta Park. This is where the Philippine’s national hero Dr. Jose Rizal was executed by the Spaniards. Then, you will continue to the walled city of Intramuros where most of the city’s historical landmarks and 2 UNESCO World Heritage Sites are located. The old city tour includes stops at Casa Manila, San Agustin church, Fort Santiago, Plaza de Roma and Manila Cathedral.

After lunch, the tour continues on towards the busiest spot in the city – Makati business district and then drive into the gated community of Forbes Park. For some peace and quiet, the tour to the American cemetery and memorial will be perfect. The tour will then end with a drive along Roxas Boulevard to see the reclaimed area of Bay city and the Cultural Center of the Philippines complex.

This is the basic tour combining the old and new parts of the city. Below, you can find information on the famous landmarks visited during it. Also, we'll describe the common locations tourists choose to add to this itinerary, most of which come with no extra cost at all. 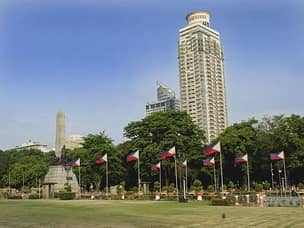 Rizal Park is an iconic park located at the heart of Manila. It spans over 60 hectares of ponds, open lawns, paved walkways, ornamental gardens, wooded areas and numerous monuments of Filipino heroes. It is historically significant because it is the spot where Dr. Jose Rizal, a national hero, was executed.

The highlight of this visit is the Rizal monument where the body of the national hero was laid to rest. It is constantly guarded by two sentries in full regalia and fronted by a 46m flagpole. There is a lagoon in the middle of the park lined with the busts of the beloved Filipino heroes. Do not miss the open-air auditorium, the chess plaza, Manila orchidarium, the drinking fountain (shipped directly from Heidelberg Germany where Rizal studied), ornamental gardens, Lapu-lapu statue and a 3D relief map of the Philippines.

While there are many different places of interest in Intramuros, some are really a must-see. If you take the shorter itinerary, it's recommended to limit yourself to just a few locations so that you can have enough time to explore each. Here are the ones we feel should always be included in your tour of the old city: 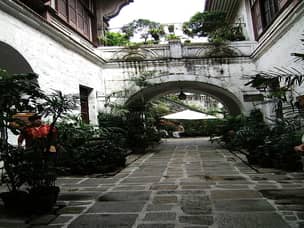 A replica of a Spanish colonial house perfectly showing the opulent lifestyle of the aristocrats in the 19th century. Former First Lady Imelda Marcos had it restored to showcase the creative design and architecture of the late Spanish period. All throughout, the features are grand and the antique furniture are simply stunning.

The premier attraction in Intramuros, Fort Santiago is the oldest Hispanic stone fortress in the country. Within it, you will find an old dungeon, theater, lovely manicured gardens, fountains and plazas, arched gate and lily ponds. It was where Dr. Jose Rizal was incarcerated before his execution and where he wrote his “Last Farewell”. The Rizal shrine can be found here as well as the Rizaliana furniture hall which houses all the furniture of the Rizal family.

During WWII. The whole of Intramuros was destroyed and most of it were left in ruins apart from one building, the church of San Agustin. For some miraculous reason, the church remained intact and it is now the oldest church in the Philippines (built between 1587 and 1606). Declared by UNESCO to be one of the World Heritage Sites, San Agustin Church is a very significant historical and cultural landmark.

Among the numerous monuments found in Intramuros, Plaza de Roma is the most well-maintained. Considered to be the center of Intramuros, it is right across Manila Cathedral. Here, stands the statue of Charles IV of Spain which was erected in 1824 in honor to him for having sent the first batch of smallpox vaccines, saving hundreds of lives during the outbreak.

Manila Cathedral was re-built 8 times. It was previously destroyed by an earthquake, bomb explosion, fire, or flood. The present church sport a Neo-Romanesque façade complete with pineapple finials, bronze doors, byzantine motifs and other popular artistic ornamentations. It has a dominant Marian theme which is not surprising because it is primarily built as a tribute to the Immaculate Conception. The design is an interesting mixture of modern, revival and renaissance.

Other interesting spots during the tour 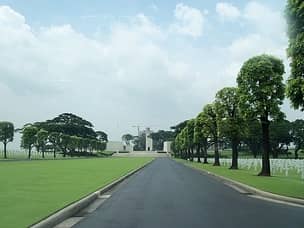 The resting place of 17,206 soldiers who gave their life during WWII, Manila American Cemetery is a peaceful and poignant place for those looking for some peace and quiet. The massive plot is perfectly manicured and lined with white crosses that provide a beautiful contrast against the verdant grounds. There are also open galleries with descriptions and murals of some of the most significant battles.

Cultural Centre of the Philippines:

Built solely for the purpose of preserving the rich Filipino arts and culture, CCP or the Cultural Centre of the Philippines is grand and imposing especially inside. There is a huge chandelier at the main entrance, 6 performance venues, 6 exhibit halls and 2 satellite venues. CCP is the place where the most talented dream to showcase their art. It was built for 3 years (1966-69) by former President Ferdinand Marcos.

National Museum of the Filipino People

Home to the remains of the earliest Philippine inhabitant, the Tabon Man (lived around 24000 BC), this museum consists of a varied and vast collection of artifacts and other valuable antique items. One big section of the museum was dedicated to the Spanish Galleon San Diego that sank off the coast of Luzon in 1600. The section showcase the wreck and the salvaged items like jewels, coins, barnacle-encrusted swords, and porcelain plates and pottery. Other treasures worth noting are: pre-Hispanic musical instruments, artifacts and indigenous textiles.

Chinatown and the Chinese Cemetery

Binondo, the world's oldest Chinatown district, is just a walking distance from the old city. Combining both gives you the perfect demonstration of how the Philippines became a melting pot for colonial and Asiatic influences that created a unique culture and personality. Chinatown is also a great place to eat your lunch at, so don't hesitate telling the guide you rather have it there.

Compared to the American cemetery, the Chinese cemetery gives off a residential suburb feels where Manila’s wealthy Chinese citizens were buried. Modern conveniences still follow the dead to the afterlife as evident in their mausoleums equipped with chandeliers, hot and cold running water, air-conditioning, flushing toilets and even a kitchen.

How Does This Tour Fit Into Your Itinerary?

While this tour can certainly be integrated into a larger Manila tour package, all you need is half a day to complete at least the basic itinerary detailed above. If you arrive back early from the islands and your international flight is late at night you can even squeeze this your on your last day before heading home.

That said, we highly recommend taking the old city tour at the beginning of your trip. It will really enhance your whole vacation. For example, visiting the National Museum before heading to the Banaue Rice Terraces will completely transform the experience, as you'll come equipped with deep insights of the country's indigenous tribal culture and history. Similarly, WW2 buffs would appreciate the stops at both the American cemetery and Intramuros before going for a full day tour of Corregidor Island.

While there are many other fantastic tours to take in and out of Manila, if you only have a single day to spare, this is the one you should book. Although undoubtedly stunning, you can see volcanoes and waterfalls while staying on any of the many beautiful islands later on during your vacation. Manila provides the best opportunity for a more culture oriented tour, and is perfect for both families, couples and even solo travelers.